Al Jazeera correspondent Shireen Abu Akleh, has been shot dead on Wednesday by Israeli fire during her coverage of the Israeli incursion into Jenin Camp in the West Bank.

“Shireen Abu Akleh, a 51-year-old U.S. citizen, was covering a military raid on the Jenin refugee camp, when she was shot in the face by a single bullet, despite wearing a press vest. she had been assassinated in cold blood, after she was targeted by the Israeli forces.” Al Jazeera said in a statement. 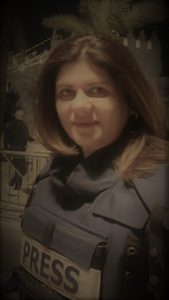 “Shireen is the face/voice of events in the Palestinian territory – probably everyone who follows news from there knows her,” Tamara Alrifai, a senior spokesperson for the United Nations Relief and Works Agency (UNRWA), told The Guardian. “It’s not possible to follow news from the West Bank and not have heard or seen reporting from Shireen.” Tamara added.

“She knew things were changing and she kept going on until she became the storyteller of the Palestine cause. She is a reference in the Arab world. Everyone in the street would stop and salute her for her courage and determination and unique way of telling the stories of Palestinians. Arabs cannot go to Palestine. Shireen took them there.” Muzna Shihabi, a longstanding Shireen’s friend, also told The Guardian.

Abu Akleh courageously walked around between both sides telling the stories of Palestinians and Israelis from homes and battlegrounds. She witnessed the second intifada, the Israeli siege of Jenin in 2002, the death of Palestinian late President Yasser Arafat, a large number of West Bank raids and faltering attempts to find a sustainable peace.

“Very sad to learn of the death of American and Palestinian journalist Shireen Abu Akleh. I encourage a thorough investigation into the circumstances of her death and the injury of at least one other journalist today in Jenin.” The US ambassador, Tom Nides, tweeted this on Wednesday.

Very sad to learn of the death of American and Palestinian journalist Shireen Abu Akleh of @AJArabic @AJEnglish. I encourage a thorough investigation into the circumstances of her death and the injury of at least one other journalist today in Jenin.

Egypt’s Mylerz gets $9.6mln in funding round