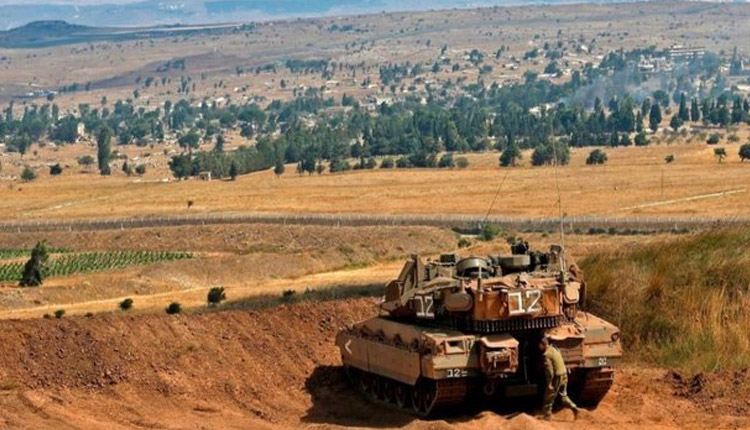 The Syrian government vowed to take back the Israeli-occupied Golan Heights as its allies and enemies alike condemned U.S. President Donald Trump on Friday for moving to recognise Israeli sovereignty over the territory seized in war.

Trump’s statement on Thursday marked a dramatic shift in U.S. policy over the status of a disputed area that Israel captured from Syria in the 1967 Middle East conflict and annexed in 1981 – a move not recognized internationally.

Against this backdrop of hostility towards the U.S. move, Secretary of State Mike Pompeo visited Beirut where he took aim at Israel’s main regional foes – Hezbollah and its backer Iran – and declared the success of U.S. sanctions against them.

Trump’s declaration is the latest U.S. step to fuel anger in the region, both in states that are hostile to Israel and others that have relations with it and are allied to the United States.jer

It follows the U.S. recognition in December 2017 of Jerusalem as Israel’s capital – a decision that also stirred international criticism as the occupied city’s status remains at the heart of the Israeli-Palestinian conflict.

Russia, an ally of President Bashar al-Assad with forces in Syria, said Trump’s comments risked seriously destabilizing the region, and it voiced hope the statement was just declaratory.

Iran, Assad’s main regional ally and which also has forces in Syria, condemned the statement as illegal and unacceptable.

“The personal decisions of Trump…will lead to crisis in the region,” Iran’s foreign ministry spokesman said.

Turkey, a U.S. ally and an adversary of Damascus, also said the move had brought the Middle East to the edge of a new crisis and the legitimization of the occupation of the Golan Heights could not be allowed.

Israeli Prime Minister Benjamin Netanyahu thanked Trump for his gesture “at a time when Iran seeks to use Syria as a platform to destroy Israel”. It could help Netanyahu in the midst of a tough re-election battle, analysts said.

The Syrian government said the Golan was an “indivisible” part of Syrian territory and recovering it “via all means guaranteed by international law is still a priority”.

It said United States with its “stupidity and arrogance” had no right to decide the fate of the area and any move to recognise Israeli sovereignty over it was “an illegal action with no impact”.

After remaining calm for decades since a 1974 armistice monitored by U.N. peacekeepers, Golan re-emerged as a flashpoint for regional tensions during the Syrian civil war. Last May, Israel accused Iran’s Revolutionary Guards of launching a rocket salvo into its territory from the Syrian side of the truce line.

Israel, which has mounted numerous air strikes against what it has called Iran-backed targets in Syria, has demanded Russia keep forces allied to Tehran away from the boundary.

The Syrian side was held by rebel forces for years until pro-government forces recovered it in July.

Jason Greenblatt, a senior White House adviser, said on Twitter that “under any conceivable circumstance, Israel could not give up the Golan … To do so would endanger Israel’s very existence”.

But Fouad Mundhir, a Syrian whose home village is in Israeli-occupied Golan, said Trump was “cancelling the will of an entire nation.

“You say you are carrying the flag of democracy. Okay, Mr. Trump, have you taken into account the will of the people of the Golan?” he told Reuters in Jaramana, near Damascus.

In the Golan itself, Druze Arabs also rejected the move, while Israeli settlers welcomed it.

The European Union said its position on the status of the Golan Heights was unchanged and that it did not recognise Israeli sovereignty over the strategic plateau.

Germany said any change in borders should be “done through peaceful means between all those involved”, while France said it did not recognise the Israeli annexation of the Golan and any recognition was contrary to international law.

The Arab League, which suspended Syria in 2011 after the start of its civil war, said Trump had paved “the way for official American recognition” of Israeli sovereignty over the Golan and called this “completely beyond international law”.

“The Arab Republic of Egypt affirms its firm position that the Syrian Golan is occupied Arab land, in accordance with resolutions that have international legitimacy,” the foreign ministry said in a statement.

It cited UN Security Council Resolution 497 of 1981, which declared an Israeli law of that year which formalised its annexation of the territory to be null and void.

The ministry called on the international community to “respect the resolutions of international legitimacy and the United Nations charter in connection with the inadmissibility of acquiring lands by force,” the statement said.

Israel says Syria’s civil war has reaffirmed the need to keep the plateau – coveted for its water resources and fertile soil – as a buffer zone between Israeli towns and the instability of its neighbour.

In Lebanon, Pompeo said the United States would continue to use “all peaceful means” to choke off funding that “feeds Iran and Hezbollah terror operations”.

“Lebanon faces a choice: bravely move forward as an independent and proud nation, or allow the dark ambitions of Iran and Hezbollah to dictate your future,” he said.

The fertile hillsides of the Israeli-occupied Golan are scattered with villages inhabited by 22,000 Druze, an Arab minority who practice an offshoot of Islam.

Many still have relatives on the Syrian side of the fortified boundary.

In Majdal Shams, older residents remember being part of Syria before Israel captured most of the heights in the 1967 Middle East war, occupying and later annexing it in 1981.

That annexation was not recognized internationally, and although they have lived under Israeli rule for more than half a century and shopfronts bear signs in both Arabic and Hebrew, many Druze still regard themselves as Syrian.

“Trump can make his statements and say he wants to make the Golan part of Israel. But we know this will stay Syrian land,” said Sheikh Mahmoud Nazeeh, 70.

Amal Safadi, 54, a librarian, said: “Our blood is Syrian. If you take a blood test for a child, it will read Syrian.”

Israel has given Druze residents the option of citizenship, but most rejected it.

In October last year hundreds demonstrated against the holding of Israeli municipal elections on the Golan, blockading the polling station in Majdal Shams and waving Syrian and Druze flags.

Madjal Shams overlooks the divide between Israeli-occupied Golan and that part of the plateau controlled by forces loyal to Syrian President Bashar al-Assad.

The two armies are divided by an “Area of Separation” – often called a demilitarised zone – into which their military forces are not permitted under a 1974 ceasefire arrangement.