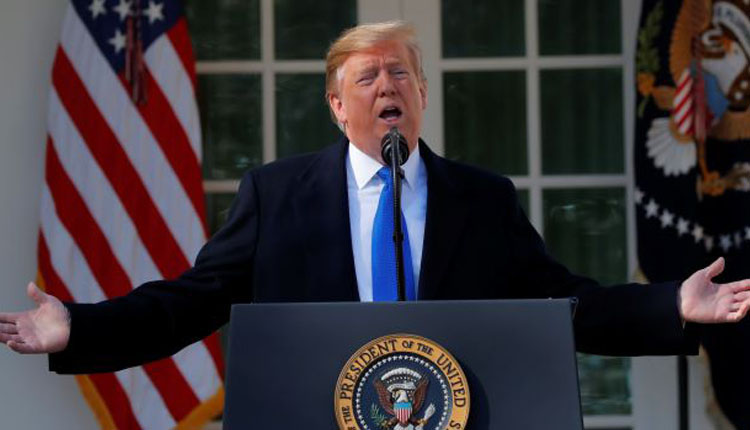 U.S. President Donald Trump said on Wednesday there were many options short of war with Iran after U.S. ally Saudi Arabia displayed remnants of drones and missiles it said were used in a crippling attack on its oil sites that was “unquestionably sponsored” by Tehran.

The president struck a cautious note as his Secretary of State Mike Pompeo, during a visit to Saudi Arabia, described the attacks as “an act of war” on the kingdom, the world’s largest oil exporter.

Trump said on Twitter that he had ordered the U.S. Treasury to “substantially increase sanctions” on Iran, which denies carrying out the attacks, and told reporters the unspecified, punitive economic measures would be unveiled within 48 hours.

Trump’s tweet followed repeated U.S. assertions that the Islamic Republic was behind Saturday’s attacks and came hours after Saudi Arabia said the strike was a “test of global will”.

Iran again denied involvement in the Sept. 14 raids, which hit the world’s biggest crude oil processing facility and initially knocked out half of Saudi output. Saudi Arabia is the world’s leading oil exporter.

Responsibility was claimed by Yemen’s Iran-aligned Houthi group, which on Wednesday gave more details of the raid, saying it was launched from three sites in Yemen.

In a remark that may further strain a tense political atmosphere in the Gulf, the Houthis said they had listed dozens of sites in the United Arab Emirates, Riyadh’s top Arab ally, as possible targets for attacks.

To bolster its assertion that Iran was responsible, Saudi Arabia showed drone and missile debris it said amounted to undeniable evidence of Iranian aggression.

An investigation into the origin of the attacks was still under way and the result will be announced later, he said.

Proof of Iranian responsibility, and evidence that the attack was launched from Iranian territory, could pressure Riyadh and Washington into a response. Both nations, however, were stressing the need for caution.

Trump has previously said he does not want war and is coordinating with Gulf and European states.

Crown Prince Mohammed bin Salman, Saudi Arabia’s de facto ruler, said the strike was a “real test of the global will” to confront subversion of the international order.

His envoy to London, Prince Khalid bin Bander, told the BBC the attack was “almost certainly” Iranian-backed: “We’re trying not to react too quickly because the last thing we need is more conflict in the region.”

The Islamic Republic dismissed the allegations.

“We don’t want conflict in the region … Who started the conflict?” he added, blaming Washington and its Gulf allies for the war in Yemen.

Yemen’s Houthi movement, battling a Western-backed, Saudi-led coalition for more than four years, said it used drones to assault state oil company Aramco’s sites. U.S. officials, however, have said the attack was not launched by the Houthis.

The raid exposed the vulnerability of Saudi Arabia’s oil infrastructure and threw down a gauntlet to the United States, which wants to curb Iranian influence in the region.

“The attack is like Sept. 11th for Saudi Arabia. It is a game changer,” said one Saudi security analyst.

Visiting Jeddah, U.S. Secretary of State Mike Pompeo said the attacks would be a major focus of next week’s annual U.N. General Assembly meeting and suggested Saudi Arabia could make its case there.

“It was an act of war against them directly, and I’m confident they will do that,” he told reporters before meeting the Saudi crown prince, later tweeting that the United States supports Saudi Arabia’s right to defend itself.

The two men “agreed that the Iranian regime must be held accountable for its continued aggressive, reckless, and threatening behavior,” the U.S. State Department said in a statement after their talks.

France, which is trying to salvage an international nuclear deal with Iran that Washington quit last year, said it wanted to establish the facts before reacting.

Saudi Arabia’s finance minister told Reuters the attack had no impact on revenues and Aramco was continuing to supply markets without interruption.

U.S. efforts to bring about a U.N. Security Council response looked unlikely to succeed as Russia and China have veto powers and were expected to shield Iran.

Russian President Vladimir Putin, who has offered to sell defense systems to Riyadh, called for a “thorough and impartial” probe during a phone call with Prince Mohammed.