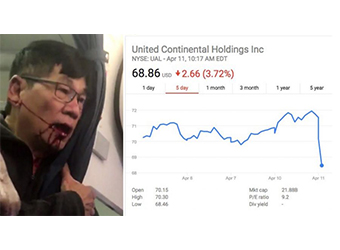 Shares in United Continental Holdings plunged on Tuesday as the company continued to draw fierce criticism for violently dragging off a passenger from an overbooked United Airlines flight so staff could take his seat.

In mid-morning trading on Wall Street, shares in the group were down around 4 per cent, temporarily wiping close to $1bn off the company’s total market value, according to Thomson Reuters data. Shares recovered somewhat towards the end of the day to close the session 1.15 per cent lower.

United Continental Holdings was also the second biggest faller on the S&P 500 index.

Footage of the incident, which occurred at Chicago’s O’Hare International airport on a flight bound for Louisville, was shared on social media and prompted outrage globally.

The man who was removed from the flight said that he was a doctor and needed to get home to treat patients the next day.

In a letter to employees, United Continental’s chief executive, Oscar Munoz, said the company had been trying to make room for four employees of a partner airline, which resulted in four passengers being told to get off the flight.

Munoz said he was “upset” by the incident, but added that employees had “followed established procedures for dealing with situations like this”, and that the passenger had been “disruptive and belligerent”.

His response was not well received and mocked online.

United shares had early Tuesday been down by as much as 6 per cent in pre-market trading.

In a second statement later in the day, Munoz apologised to employees and appeared to backtrack on his earlier statement.

“No one should ever be mistreated this way,” he wrote. “I want you to know that we take full responsibility and we will work to make it right.”