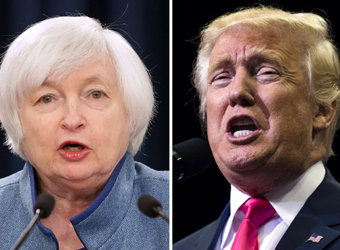 President-elect Donald Trump has vowed to repeal the Dodd-Frank banking reforms, which were designed to prevent a repeat of the 2008 financial crisis. Fed Chair Janet Yellen doesn’t sound happy about it.

At a news conference Wednesday, the central bank leader defended the safeguards for the banking system.

“We lived through a devastating financial crisis. Most members of Congress and the public came away from that experience feeling that it was important to take a set of steps that would result in a safer and stronger financial system,” she said. “I feel that we have done that.”

The regulations have led to a better-capitalized, less-indebted system than the one that capsized during the 2008 crisis under the weight of bad mortgages and excessive risk-taking.

However, critics say that it has handcuffed banks — especially midsized and smaller institutions — keeping them from providing capital and increasing costs that have been passed onto consumers.

Yellen conceded that some changes need to be made to take the onus off smaller institutions. But she said the concept behind Dodd-Frank is sound.

“I think it’s very important that we have reduced the odds that a systemically important firm could fail by requiring higher capital, higher liquidity, by performing stress tests that provide us another way of insuring that the firms we count on to supply credit to households and businesses would be able to go on doing that even in the face of a severely adverse shock,” she said.

Yellen wants to serve out her term, despite Trump pressure