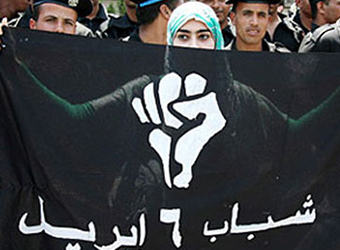 A South Giza prosecution has ordered that political writer and researcher Zizo Abdo is to remain in custody pending a court decision on Tuesday.

The prosecution says that Abdo, who is a spokesperson for the 6 April Youth Movement, violated his probationary measure last week that mandates that he must report in to a police station three days per week from 4pm to 6pm.

According to Abdo’s defence lawyer, he was unable to report in as scheduled because he was arrested at a cafe in Cairo on Wednesday and held for several hours.

Abdo was released in September pending trial five months after he was arrested on charges of inciting to topple the regime.

He had participated in an April protest against the government deal handing over two Red Sea islands under Egyptian control to Saudi Arabia.

In January, 6 April Movement co-founder Mohamed Adel was released after finishing a three-and-a-half-year prison sentence on charges of violating Egypt’s protest law, and must serve a three-year probation where he is required to report in to a police station on a daily basis for 12 hours.

Adel is facing the same probationary terms imposed on Ahmed Maher, the founder of 6 April, who was also released from jail in January after serving his sentence on similar charges.