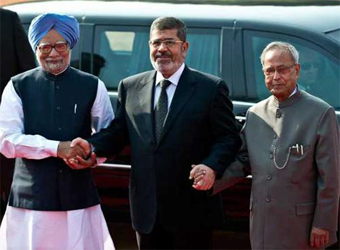 Egyptian President Mohamed Morsi has begun his visit to India with a ceremonial welcome at the presidential palace in New Delhi on Tuesday morning.

Morsi is leading a high-level delegation of business leaders and ministers, including the ministers of communications, information technology, trade, commerce and investment.

Bilateral trade between the countries has increased significantly in the recent years in spite of the political transition in Egypt and currently stands at US$ 5.5 billion.
Morsi is due to hold bilateral discussions with Indian Prime Minister Manmohan Singh later in the day and the two sides are expected to sign deals to further deepen and diversify the growing bilateral trade and investment.

Morsi will be also addressing a meeting of leading Indian businessmen to woo investments.
India is Egypt’s seventh largest trading partner and second largest source of its exports.
More than 50 Indian companies have presence in Egypt in various sectors and the cumulative Indian investments in Egypt are more than US$ 2.5 billion.

Trade in Indian two-wheelers, petrochemicals, biotechnology, information technology, healthcare products and other goods will all be discussed, Indian officials said.