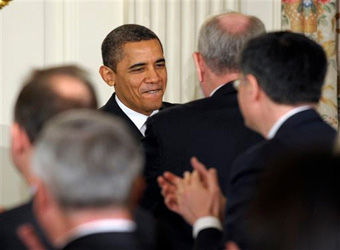 President Barack Obama Monday urged the nation’s governors to invest more state resources in education, saying a highly skilled workforce is crucial for the U.S. to remain competitive with other countries.

Obama made his pitch at a White House meeting with governors in Washington as part of the annual winter meeting of the National Governors Association. The president and first lady Michelle Obama hosted a black tie dinner with the governors Sunday night.

Obama said at Monday’s session that he sympathized with governors whose state budgets have been badly squeezed during the economic downturn. But he said that was no reason to trim resources from schools.

“The fact is that too many states are making cuts in education that I think are simply too big,” Obama said. “Nothing more clearly signals what you value as a state than the decisions you make about where to invest. Budgets are about choices.”

He reaffirmed his view that decisions about education should be left to states and not the federal government. “I believe education is an issue that is best addressed at the state level,” the president said, “and governors are in the best position to have the biggest impact.”

It was a message directed largely to Republican governors, many of whom have complained of too much federal intrusion in state matters including education. Several prominent GOP governors were in the room as the president spoke, including Chris Christie of New Jersey and Bobby Jindal of Louisiana.

Obama earlier this month granted waivers to 11 states, freeing them from some of the toughest requirements of the No Child Left Behind Act, as long as they measure student progress with their own standards, according to Jim Kuhnhenn.

He called on governors to assist that effort toward a more state-centered approach to education by spending more on education.

“That does not mean we have to invest in things that aren’t working,” he said. “It doesn’t mean that it doesn’t make sense to break some china and move aggressively on reforms. But the fact of the matter is we don’t have to choose between resources and reforms, we need resources and reform.”

Specifically he called for more teachers in the classroom. He also noted that 21 states require students to stay in high school until they graduate or turn 18.

“I urge others to follow suit of those 21 states,” Obama said.

On higher education, Obama said more than 40 states have cut financing of public colleges and universities over the past year. “This is just the peak of what has been a long term trend of reduced state support for higher education,” he said.