Tunisia Will Not Follow Egypt in Listing Brotherhood as Terrorist Group: Official 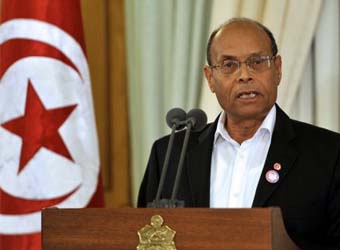 Tunisia’s presidential chief of staff, Adnan Nasr, said Saturday that his country will not follow Egypt’s decision to list the Muslim Brotherhood as a terrorist group.

“Tunisia has great reservations over how the crisis in Egypt is being managed. We know that in all political crises need peaceful solutions. However, there doesn’t seem to be any … and for that we expect difficulties in exiting the crisis,” said Nasr in interview with Algerian Al-Shorouk newspaper.

Nasr further added that his country is not “obliged or concerned” by the recent memo issued by the Arab League informing its members of Cairo’s desision to tag the Islamist group as terrorist.

On 25 December, the interim government declared Mohamed Morsi’s Muslim Brotherhood a terrorist group, accusing it of links with recent attacks on state institutions and on churches since Morsi’s ouster.

The Islamist group denies the accusations.

In a statement on 27 December said that the Egyptian government’s move aimed to target the gains of the January 25 revolution, freedom and democracy, and was singling out a political group that is committed to democracy and peaceful activism.

In response, Egypt summoned Qatar’s envoy in Cairo to protest what it described Doha’s interference in Egyptian internal affairs.

The decision to designate the Brotherhood a terrorist group also raised the concern of the US State Department, which feared it might hinder the transitional roadmap announced since Morsi’s ouster 3 July 2013.

US officials have added that the administration of President Barack Obama is not considering, or even discussing, designating the Muslim Brotherhood a terrorist organisation.

The UK’s Home Office spokeswoman told Ahram Online in December that UK authorities “are following local law and procedures on proscribing any organisation or group,” hinting that the UK government will not follow Egypt’s decision.

Egypt Inks the Global Code of Ethics for Tourism