Entertainment
By Administrator On Feb 27, 2012 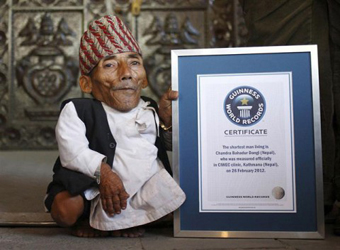 Home to Mount Everest, the world’s highest peak, the scenic country of Nepal on Sunday added another height-related superlative – of having the world’s shortest man.

A Guinness World Records team measured Chandra Bahadur Dangi at 54.60 centimeters, declaring the 72-year-old even shorter the previous titleholder, Junrey Balawing, from the Philippines, who stood at 23.5 inches at the age of 18 last year.

“If he is really 72 years old he is the oldest person to be awarded the shortest-man record,” Glenday said, adding Dangi was also the shortest person ever measured by the Guinness World Records.

From a poor and uneducated family in a remote part of Nepal, Dangi said he had never heard of Mount Everest and was unaware of the world record title before a timber merchant visited his remote village last month and decided to measure him.

His diminutive size has since made him a celebrity in the impoverished nation of 26.6 million people and he took a plane for the first time last week to travel from his village, Rimkholi, 267 km west of Kathmandu, to meet the Guinness World Records officials in the capital.

“I am good. I feel happy,” Dangi said holding two framed certificates. “I want to travel around the world and spread the name of my country.”

Dangi, whose parents died when he was still in his teens, lives with his brother.