Australian charged with murder over death of French tourist 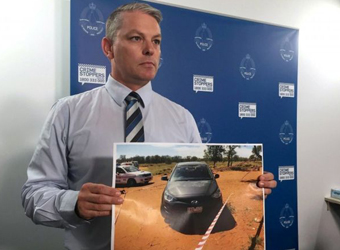 Police in Australia have charged a 35-year-old man with murder after the death of a French tourist in the Northern Territory.

Philippe Jegouzo, 33, was allegedly stabbed in the neck in an unprovoked attack, after he and his wife had stopped at a rest area at Conners Well on the Stuart Highway about 100km (60 miles) north of Alice Springs.

The accused will appear at Alice Springs Local Court on Monday.

Mr Jegouzo’s wife tried to beat off the attacker by hitting him with a picnic table, according to local press reports.

After the attack, she flagged down a passing car in which a nurse and her husband were travelling.

The nurse tried in vain to save Mr Jegouzo’s life, while her husband drove to the Aileron roadhouse, 40km (25 miles) further north, to raise the alarm.

On Thursday, police detained a Melbourne man who had spent a night on the run in the bush.

The suspect remains in hospital, suffering from heat exhaustion and dehydration.

The Stuart Highway runs from Darwin to Port Augusta through the central Australian deserts for nearly 3,000km (1,875 miles) and is a popular route for outback travellers.

Detective Superintendent Travis Wurst of the Northern Territory police described the attack as “bizarre” and “random” and said tourists should not be worried about driving through the area.

“There are no safety concerns for any tourist or any traveller or any resident of Alice Springs or Central Australia whatsoever,” said DS Wurst.

Apple shows interest to get into self-driving car race