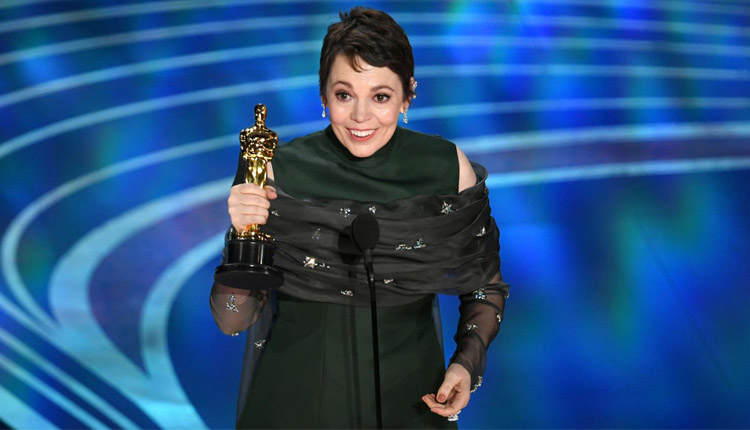 Looking stunned as her name was read out, Colman struggled to speak through tears after being honoured for her role in The Favourite.

“OK, I have to thank lots of people, if by the way I forget anybody I’m going to find you later and I’m going to give you all a massive snog and I’m really sorry if I might forget now.

“But Yorgos, my best director and the best film, and with Emma and Rachel, the two loveliest women in the world to fall in love with, and to go to work with every day, I mean, you can imagine, it wasn’t a hardship.

“It’s genuinely quite stressful. This is hilarious. I got an Oscar!” she exclaimed

“And to be in this category with these extraordinary women, and Glenn Close… you’ve been my idol for so long and this is not how I wanted it to be and I think you’re amazing and I love you very much.

Apologising to anyone she would forget in her speech with the promise of giving them “a massive snog” later, she thanked Lanthimos, as well as Stone and Weisz, “the two loveliest women in the world to go to work with”.

Colman, 44, then thanked her parents, her longstanding agent and her new publicists, her three children, who she hoped were watching at home “because this isn’t going to happen again”.

She also thanked her husband, Ed Sinclair, with whom she has been for 25 years, calling him “my best friend”. “I love you so much,” she concluded, noting that she had been asked to wrap up her speech, before gurgling in genuflection in front of Lady Gaga.

It caps an extraordinary awards run for the 44-year-old, who took best actress in a comedy or musical at the Golden Globes in January and best actress at the Baftas in February, as well as a slew of smaller awards.

The Favourite went into Sunday night’s ceremony jointly leading the nominations, with 10, alongside Roma. In the film, which is considered one of the most adventurous to progress to such an elevated position at the Oscars, Colman stars as Queen Anne, the erratic and gout-ridden monarch who finds her heart torn between longtime companion Sarah Churchill (Rachel Weisz) and Churchill’s cousin, Abigail Masham (Emma Stone).