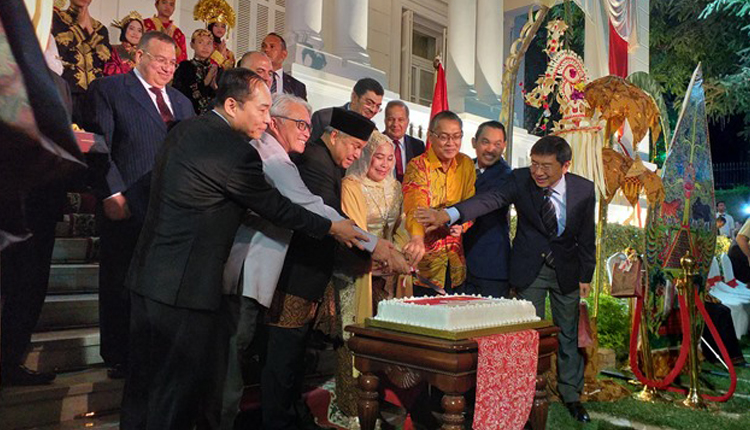 Egypt will partake in the 34th Trade Expo Indonesia 2019 due to be held in Jakarta on October 16-20, said Indnesian Ambassador to Egypt Hrlmy Fawzy during a celebration of the 74th Anniversary of the Independence of the Republic of Indonesia.

“Egypt is one of the main non-traditional trading partners for Indonesia. The Indonesia-Egypt trade volume in the past 5 years has always recorded a positive trend, ranging from $1.2-1.5 billion annually. And Egypt is the biggest Indonesian trading partner in Africa,” he said in his speech.

He added that both countries held the 6th round of bilateral consultation on June 27, 2019 and resulted in forming the Joint Trade Committee (JTC) to establish the legal framework of trade cooperation between the two sides. Mr. Fawzy highlighted the embassy’s efforts in promoting Indonesian tourism in Egypt through holding trips for Egyptian travel agencies and journalists to reflect their experience of enjoying Indonesia touristic places in their home over the last three countries.

“We have also organized Familiarization Trip or Famtrip to tourism destinations in Indonesia for tour operators and travel agents from Egypt as well as for media people. In addition, we have conducted some travel gatherings to further promote tourist visits from Indonesia to Egypt and vice versa. All these are undertaken to bring Indonesian and Egyptian people closer to each other,” he said.

He said that 6,300 Indonesian students are having their academic education at Al-Azhar University, adding that the number increased to around 7,500 students this year.

Mr. ambassador also expressed his country’s welling to expand cooperation with Egypt in the field of information, communication and technology (ICT), besides, in various infrastructures such as roads, factories, cities, ports, dams, and economic zone in Egypt and other African countries.

“Egypt has sustainable water management and modern irrigation system that increase yields with lower cost. Indonesia could take a lesson from Egypt as a best practice to implement the irrigation system,: Mr. ambassador said.

Indonesia got its independence on the 17th of August 1945 from Netherlands. It is a country of multi-ethnic, multi-religious, and multicultural nation which has more than 17.000 islands, more than 300 ethnic groups, more than 700 languages and 6 different major religions.

Traditional Indonesian songs, musics, and dances were performed during the celebration, which was attended by other ambassadors to Egypt and their spouses.

Egypt lining up to use landfill gas to produce electricity