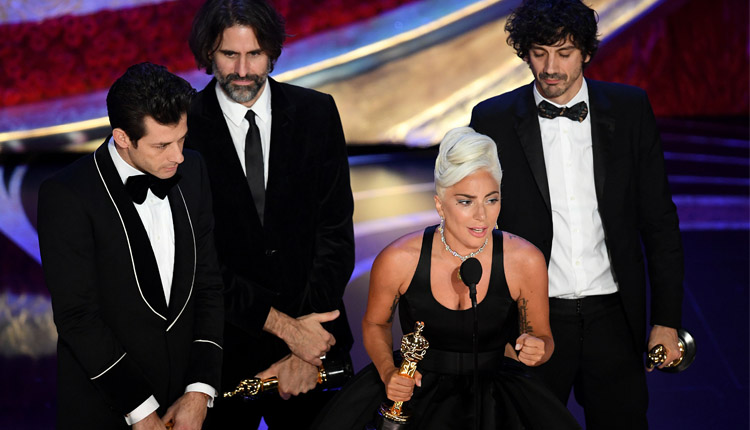 Lady Gaga’s “Shallow” won best original song at Sunday’s Academy Awards telecast, in a culmination of what may have been the least suspenseful race of this year’s Oscars. Gaga had performed the tune from “A Star Is Born” as a duet with Bradley Cooper a short time earlier, in a riveting performance that earned a standing ovation.

The award for “Shallow” went to Gaga and co-writers Mark Ronson, Andrew Wyatt and Anthony Rossomando.

“Bradley: there’s not a single person on the planet that could have sung this song with me but you,” said a tearful Gaga. “Thank you for believing in us. … And if you are at home and you’re sitting on your couch, and you are watching this right now, all I have to say is that this is hard work. I’ve worked hard for a long time, and … it’s not about winning. But what it’s about is not giving up. If you have a dream, fight for it. There’s a discipline for passion, and it’s not about how many times you get rejected or you fall down, or you’re beaten. It’s about how many times you stand up, and are brave, and you keep going.

Lady Gaga has won the best original song Oscar for ‘Shallow’, the keynote track from A Star is Born. The widely-predicted victory, which she shared with co-writers Mark Ronson, Andrew Wyatt and Anthony Rossomando, was the film’s first award of the night.

In her speech, Gaga thanked her director and co-star, Bradley Cooper, for “believing in us”. She added: “There is not a single person on the planet that could sing this song but you.”

Gaga continued with a shout-out to aspirational artists watching the ceremony: “If you’re at home, and you’re sitting on your couch, all I have to say is this is about hard work… I worked hard for a long time. It’s not about winning, it’s about not giving up. If you have a dream, fight for it”.

Cooper and Gaga’s duet on ‘Shallow’ earlier in the ceremony proved one of the major talking points of the 2019 show, due to the closeness of the pair – and the camera.