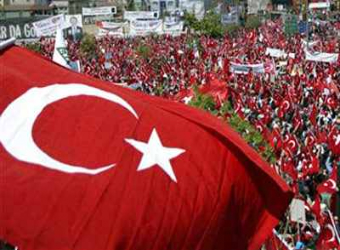 A representative of the CHP, Minister of Parliament Ahmet Haluk Koç, said: “The mass death sentences will lead to polarisation, divide the Egyptian society and create wounds that cannot be treated,” noting that the Egyptian judicial system should review the sentences handed out.

The representative of the AKP, Hamza Dag said the sentences were purely political, aimed at intimidating the anti-coup blocs in Egypt and constitute a stain on the conscience of humanity, pointing to the numerous violations of human rights that have been committed after the coup in Egypt.

Rashad Dogru, the representative of the Nationalist Movement Party, emphasised the need for the committee to speak out against the abuses occurring in Syria, Egypt, Iraq, Ukraine, Eastern Turkestan and Karabakh occupied by Armenia and the Ahiska Turks who had been denied, by the Soviet Union, from their original homeland in South Georgia .

The representative of the Peace and Democracy Party, Murat Bozlak, accused the Egyptian courts of acting as political bodies that have nothing to do with religion, morality, human rights or the law.

Bozlak added Turkey has still not shown a strong reaction to the executions that have been exercised in Iran.

Egypt Plans Economic Restructuring Ahead of May Elections