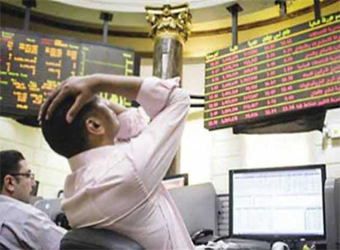 turned to losses by the end of trading on Wednesday, with losses worth 45 Egyptian pounds amid local profit-taking. In addition, the main stock index – EGX30 pared early rally to close at 7930 points.

Turnovers above one Billion Pounds
Through the closing session of Thursday, the trading volume has reached 273.195 million securities, with turnovers worth EGP 1.224 billion, exchanged through 32.636 thousand transactions.
Also during the closing session, 183 listed securities have been traded in; 162 declined, 12 advanced; while 9 keeping their previous levels.

Egyptian investors were net sellers seizing 73.42% of the total market, with a net equity of EGP 520.388 million, excluding the deals.

On the other hand, Arab and the non-Arab foreign investors were net buyers capturing 13.9% and 12.68% respectively of the total markets, with a net equity of EGP 290.308 million and EGP 230.080 million respectively, excluding the deals.

At the EGX30, Cairo-based investment bank EFG-Hermes Holding (HRHO.CA) saw its share price fall on Thursday by 0.48 percent to EGP 12.40.

ITIDA-Egypt Approves to Include TIEC to its Affiliates