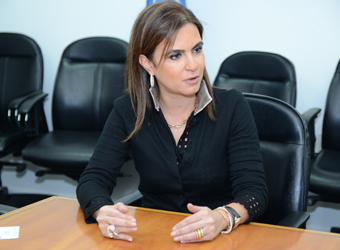 Egypt’s Investment and International Cooperation Minister Sahar Nasr is set to present opportunities for investments boost in Egypt to global business figures at the Future Investment Initiative conference in Riyadh, according to a statement from the ministry.

Nasr will also meet with heads of Arab investment funds and Saudi officials on the sidelines of the upcoming conference.

The minister’s two-day visit comes as Saudi Crown Prince Mohammed bin Salman announced on Tuesday a $500 billion plan to create an international business and industrial zone, known as NEOM, which is set to extend across its borders into Jordan and Egypt, according to Reuters.

The conference, headed by bin Salman, will be attended by over than 2,500 business figures, with with assets totaling $22 trillion, from 60 countries around the world, an official statement by the ministry said.

Attendees at the conference will include former British Prime Minister Tony Blair, former French President Nicolas Sarkozy, IMF chief Christine Lagarde, as well as a number of heads of international banks and companies, including Siemens, Emaar, Amazon, MasterCard, and Aramco.

The initiative will provide a platform for discussing global investment trends and for discussing the influence social, environmental, and governance issues upon profit potential.

The event also serves to create a collaborative network of influential investors from across the world.

Saudi Arabia was one of several Gulf countries that provided the Egyptian government with billions of dollars in aid shortly after the election of President Abdel Fatah al-Sisi in 2014.

The kingdom has also contributed investments and deposits to aid Egypt’s ailing economy, and in March resumed oil shipments by Aramco after they were suspended last year.

Gulf bourses may firm up on higher oil prices